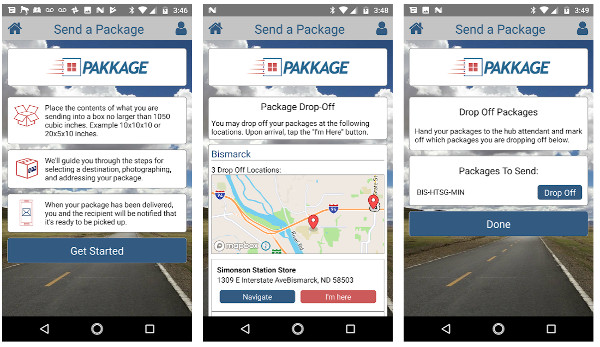 Pakkage PAYS YOU for driving to places you were already heading to! Tell the app where you're heading to and from. We'll show you a list of packages that need to be dropped off where you're going. Get paid $3 a package (plus tips). This means you could cover your gas and put a little change in your pocket, all for just dropping off packages where you were going anyway!

PageDragon took this project over for Marlo Anderson, of National Day Calendar fame, from a previous development team. The project had been languishing and the owner was frustrated with progress, as two years had passed with not much to show. PageDragon accomplished in 90 days what the previous team had failed to do in 28 months.

The Pakkage mobile app truly demonstrates what PageDragon can do, as it coordinates senders, packages, and drivers across an entire state (soon to be multiple states). It utilizes the phone’s camera, bar code/QR scanning, and geolocation, while guiding senders through the process of dropping their package off and drivers through the process of picking packages up and getting them to their destination hubs. The app also collects money from senders and provides for tipping.

Under the hood, Pakkage relies on Google Firebase (Auth, Storage, and Firestore), and is a React Native project.